In the first of a series of brief insights, Charles Rozario chats to Ronnie Gori, a long standing Amnesty activist, volunteer, former Board member and human rights champion about his human rights journey and why he decided to leave a gift in his Will to Amnesty.

What inspired you to be a human rights defender?

I came from an abusive family and I remember coming across that quote by Edmund Burke, “The only thing necessary for the triumph of evil is for good men to do nothing.” That stuck with me for most of my life. I wanted to be the opposite of my father. I guess you could say that’s what inspired me at the start.

How did your journey as an Amnesty activist begin? 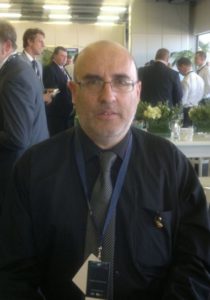 Well I after completing my engineering degree in 1979, I moved to the UK with work. There, I joined a local Amnesty group in Essex. I served as the Fundraising Secretary for eight years and I’m still in touch with some of the members of that group to this day. We did fundraising activities like the well known Amnesty Candle Day, but we also did barn dances and I even turned my own house warming party into a fundraising event.

It looks like you always remained an Amnesty supporter since then. Tell us a little more about that.

I was in the UK for a little over 10 years before coming back home. I joined the local Amnesty group in Prospect, Adelaide and then after another decade or so I moved to Canberra where I later became part of the ACT Branch Committee.

What human rights issues do you feel most passionate about?

I feel passionate about all of it as I imagine most supporters do, but two things that stand out for me are women’s rights and Indigenous rights.

Are there any memorable events that come to mind during your time as an activist?

Without a doubt, the Stop Violence against Women Campaign is one. I remember it was on White Ribbon Day back in 2008 when we were all on the lawn of Parliament House. Claire handed a petition of 30,000 names calling for a national plan to eliminate violence against women to Tanya Plibersek who was the Minister for the Status of Women at the time.

We also campaigned for women and girls in Papua New Guinea, domestic workers in Indonesia, survivors of sexual slavery at the hands of the Japanese military in World War II, survivors of rape as a weapon of war in the Democratic Republic of Congo, and women human rights defenders in Nepal and Iran.

During that campaign I came to realise just how systemic the issues were that women faced. Of course I’m not at all qualified to speak on behalf of the rights holders but just being involved truly heightened my awareness.

You have also left a gift in your Will to Amnesty. What motivated you to do this?

Well the work must continue long into the future. I mean, there will be wins but there are many challenges so we need to keep going. Just seeing the next generation come on board with their energy and passion is a wonderful pay-off in itself.

Those like me who have been around for a while still have a lot to contribute, but seeing the new generation is absolutely brilliant. It gives us hope that there are still more victories ahead. That is why I left a gift in my Will to Amnesty. It’s important to me that the work continues.

What would you say to others about leaving a gift in their Will to Amnesty?

I think it’s so easy to forget that there are a great many people who have fought long and hard for human rights. You just need to look at history, but sometimes it can be a distant thing — especially if it doesn’t affect us. Just look at the struggle of the Indigenous communities and the refugee crisis. It’s so easy to look the other away.

Our capacity and our resources will always be limited, but together we can achieve so much. This is why I’ve never stopped being an Amnesty activist and supporter. And I want my support to go on even after I’m no longer in this world. I think when you look at it that way, it’s easy to see the impact that comes from leaving a gift in your Will. It’s for a future world where human rights are defended and respected.

For more information about leaving a gift in your Will to Amnesty, check out our bequests page or contact Charles Rozario directly on (03) 94120730 or charles.rozario@amnesty.org.au.