Imran Mohammad is Amnesty International Australia’s Blogging Competition 2016 winner. Imran, now 22, fled Myanmar at age 16 and taught himself to read and write English while being held on Manus Island. Here is his powerful winning entry.

I’m a passionate young writer incarcerated by the Australian Government for over three years on Manus Island, PNG. This indefinite offshore processing centre has ensured the loss of the rights of refugees in a world of power, greed and cruelty. Compassion, love and equality have died, along with human rights. I search my mind for the crimes that I committed; I come up with nothing.

I question what has happened to this world where refugees – among the most vulnerable people in the world – are treated like animals.

For the Rohingya ethnic group, creating a sense of identity is a difficult task. My ancestors have lived in Rakhine, Myanmar for generations. However, our country won’t acknowledge our existence. We’re known as illegal migrants in our own land, stateless people. Many people in this world take for granted that they can get a passport, but we are denied this right.

We are not even given a birth certificate or any other documentation to prove our citizenship. Rohingyan people are denied freedom of movement, access to social services and more importantly, education. Tragically we are victims of unprovoked violence, spread by fear, ignorance and hate. When a government doesn’t allow media or international visitors, the world should question this. They would be horrified; women and girls are raped, brothers buried alive and young boys killed. 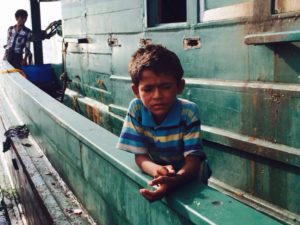 A Rohingya child on a boat at sea © Thapanee Ietsrichai

‘Everything was snatched from me’

Everything was snatched from me one dark night. I was threatened with death and fled my country. I lost everything precious to me; I couldn’t hug my mother for the last time.

I embarked on a journey in search of a place to rest my head in peace. There was no other way to leave Myanmar except by boat in the middle of the night. I crossed the ocean for 15 days from Bangladesh to Malaysia. I left Malaysia after experiencing so much cruelty in a few months. I arrived in Indonesia in 2012 and devastatingly, I was imprisoned for two years.

I was recognised as a genuine refugee by UNHCR. I waited for so long but I was stuck in limbo with no hope of a visa, no way to support myself. I was sure I would die if I stayed. In October 2013, I boarded a boat to Australia. I was detained on Christmas Island until against my will, I was moved to Manus Island Detention Centre which was clearly built for intentional torture.

The Australian government never had a plan to resettle refugees in PNG and the PNG Supreme Court found this camp illegal under its constitution. Again I was given refugee status by PNG, yet I am still imprisoned behind high fences. My friends who came with me on the same boat are free in Australia. We are not welcome in this country. I’ve lived in great fear since I arrived and as proof we are unsafe, I was beaten inside the detention centre during the 2014 riot. 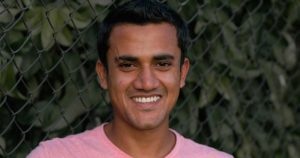 There is no end date and my future remains unclear. All I receive from Australian Government is constant, endless torture.

I’m a refugee who refuses to surrender my hope. I hold on to my belief in humanity and freedom. I never got the chance to attend school or university; these words in English are my own – painstakingly studied with limited resources.

I have the power to give a voice for those who are voiceless. I survived the worst of life on the gift of love, the key to human survival. All I need is a chance to raise my voice on behalf of the millions of refugees to advocate for their right to live the life they deserve.

"My name is Imran Mohammad and I am 23 years old. I was born in Myanmar, where I didn't receive any of my human rights. I have been locked up in Manus Island offshore prison, behind tall wire fences, for over 4 years. My future plans are to set up an organisation that will work for refugees. It will build shelters in places where nothing exists to protect women from being raped, save older people and children from dying. For now, I have my passion to write and this will keep me strong."
Load More